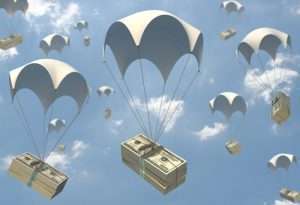 The government gives away money for things it considers important. Readers heaped criticism on this when the money was used to try to lure grocery stores to “food deserts,” or neighborhoods without access to full-service supermarkets. Success in that program has been slow and, in some cases, elusive, although backers said it is a fine example of Washington using its resources for the greater good.

But what about other federal government giveaways to businesses – the kind that don’t involve the poor? Are they sound taxpayer investments or are they, as some readers characterized the Healthy Food Financing Initiative, just a different form of welfare?

Here are the ten biggest federal business grants to for-profit companies in Ohio in the last ten years. The Northeast Ohio Media Group downloaded and sorted the numbers from USASpending.gov, a government database.

1. $66.5 million – for Horizon Telecom, of Chillicothe, to build a broadband network in 34 southern and eastern Ohio counties. Federal and state officials said the counties – and their schools and hospitals – were falling behind in high-speed communication because they collectively lacked the kind of market power that convinced technology and fiber-optic companies to invest in major cities. This grant, awarded in 2010, was funded through the American Recovery and Reinvestment Act, which Congress authorized to help the economy pull out of recession.

2. $57.5 million – for FirstEnergy Services Co., an arm of the Akron-based electricity provider, for electricity efficiency. The money paid for the installation of smart meters at Cleveland-area homes and businesses. Smart meters provide electronic communication between homes and the utility, allowing for more efficient energy use. Energy efficiency and self-sufficiency were federal goals during the presidency of George W. Bush, but this particular federal grant was made in 2010 as part of the stimulus, promoted by President Barack Obama.

3. $48.5 million – for Phycal Inc., a Highland Heights startup, to help design a high-yield algae farm and bio-refinery in Hawaii. Phycal developed a strain of cassava to produce low-cost sugar that can be used for to produce algae – which in turn can be made into ethanol, an alternative to petroleum-based fuel. The government’s goal with this 2010 award was energy efficiency and a reduction in oil reliance.

4. $30 million – for Com Net, Inc., of Wapakoneta, to build a high-capacity fiber broadband network throughout western Ohio. This was stimulus money, too, intended for the same purpose as the Horizon Telecom grant: bringing high-speed communication to rural and small communities.

5. $20.6 million – for Novolyte Technologies, of Independence, to help develop next-generation lithium-ion batteries for use in electric vehicles. Novolyte was owned by a private equity firm, Arsenal Capital Partners, and had its manufacturing plant in Baton Rouge, Louisiana. It subsequently formed a partnership with a Chinese company, then was acquired by the German industrial firm BASF in 2012. The government’s goal here was conservation research and development; in announcing the grant, the Department of Energy said that Novolyte was the only U.S. manufacturer of a type of nonaqueous electrolytes used in lithium-ion batteries.

6. $19.5 million – for Brush Wellman, Inc., of Cleveland, to research beryllium production. Brush Wellman, which is now called Materion, Inc., was already this country’s top producer of beryllium, a metal used in weapons and electronics, and the 2009 Air Force award was characterized as continuing defense research. Brush Wellman got a similar grant for $6.3 million in 2006.

7. 16.9 million – for American Electric Power Corp., a Columbus-based utility company, to build a commercially viable facility to capture and store carbon emissions at its Mountainair coal-burning power plant in New Haven, West Virginia. The Department of Energy announced in 2010 that the company was eligible for up to $334 million in grants – half the projected plant costs, with AEP to pay the rest. But AEP pulled the plug in 2011 after completing the first phase and deciding it might not be able to recover its own eventual costs through electricity rates. As a result, the government wound up spending $16.9 million, or just a portion of the $334 million that was first announced, AEP spokeswoman Melissa McHenry said. The government’s stated interest? If carbon capture and sequestration could become commercially viable, it could lead to dramatically cleaner energy production in states that rely on coal for their power.

8. $10.7 million – for General Electric’s jet engine division, based in the Cincinnati suburb of Evendale, to research, develop and test an advanced, affordable turbine engine for the Army. This was just the latest such grant to GE, awarded in 2014, part of a $60.8 million grant package that started in 2007 and runs until next year. The goal is to create the next generation of military helicopters, which would cut fuel consumption, improve engine horsepower, reduce production costs and extend the vehicle’s life. If the incremental grants were counted as one, GE’s rank on this list would rise. Regardless, the company is in the top ten of private-company recipients based in Ohio.

9. $7.4 million – for L.G. Fuel Cell Systems, of North Canton, for research into improving the reliability of solid oxide fuel cell systems. The Department of Energy made the grant this year to L.G., a division of a South Korean company that in 2012 bought a 51 percent stake in Rolls Royce Fuel Cell Systems, Inc., operating on the Stark State College campus. Fuel cells combine hydrogen and oxygen to create energy, and the North Canton operation is developing large fuel cells for industrial, commercial and utility use. The federal goal is to improve reliability of advanced energy sources.

10. $6.85 million – for Cooper Tire and Rubber Co., of Findlay, to evaluate whether a rubber-producing shrub called guayule can be used for tires – and the residue for a biofuel. Guayule is grown in the American Southwest. The Department of Agriculture awarded the money to Cooper in 2012, saying it has an interest in alternative sources of natural rubber for tires because the supply and price of another material, Hevea brasiliensis — better known as the rubber tree — are too volatile.