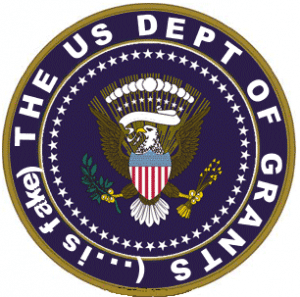 Here’s John Kelly of The Washington Post, in his own words, relating his experience with being offered $9,200 out of the blue, “for being a good citizen.”

Isn’t it nice that even though dozens of federal agencies were shut down, the U.S. Government Grants Department was able to stay open?

That’s who called me last week with the welcome news that I was going to be paid $9,200 — tax-free — simply for being a good citizen.

The call came to me at home, from which I work a few days every week. I’ve become accustomed to telephone solicitations, people wanting to refinance my mortgage, clean my air ducts or install a home security system.

This one was different. A heavily accented man who identified himself as Julian explained that because I always paid my bills and taxes on time, was current on my mortgage and had not been convicted of a crime in the past two years, the government wanted to reward me with a “grant.” I was one of only 1,500 people across the nation selected for this largesse. All I had to do was call a number and provide my confirmation code: GG1055.

I knew from the start, of course, that this was a scam. But I wondered how exactly it was a scam. And so I told Julian that I was a writer at The Washington Post, and I asked him why I was getting that particular amount of money. Why not $900? Or $10,000?

Throughout our conversation, Julian adopted an “I just work here” attitude. He deflected every question I asked, assuring me that all would be explained if I just called the number.

“We are not trying to take your money,” he said. “We’re trying to deliver your grant money.”

And you work for the federal government, I asked.?

“But isn’t the government shut down? Shouldn’t you be shut down?”

“You don’t understand me,” Julian said. “That’s the reason that you doubt.”

No, I thought. I understand you all too well. We hung up, and I called the number. It had a 206 area code: Washington state.

I explained that I was with The Washington Post and I asked where the man was.

“Washington, D.C., Independence Avenue,” he said. “In the Health and Human Services building.”

“What color is that building?” I asked.

It was a silly question on my part. He could have easily Googled the HHS building. Instead, he sounded insulted, as if I were questioning the honesty of an essential federal worker. He hung up on me.

I called back and was hung up on repeatedly until I managed to extract a promise from the U.S. Government Grants Department: A manager would call me back.

So how were they going to take my money? According to complaints I found online, this scam has been going on for a few years, though it seems to have heated up recently. Sometimes the scammers ask for a checking account number so they can deposit the grant — and siphon your money. Other times they ask for a credit card number so they can deduct $360 before releasing the grant.

But there is no grant, except for the ones that gullible consumers give to these criminals.