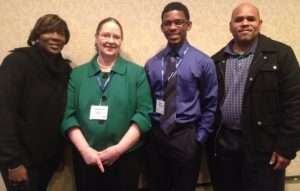 BIRMINGHAM, Alabama — For the first time in its 67-year history, a black high school student has won top honors in the Gorgas Science Scholarship Competition.

The Gorgas Scholarship Committee announced this week that the winner of the first-place tuition grant of $4,000 was Arrix Ryce, a senior at Jefferson County International Baccalaureate School.

“After being named the winner, I realized that this win wasn’t just a win for me; winning the Gorgas Competition was a win for the black community,” Ryce said in an email to AL.com.

“Nothing comes easy, and neither did this win. But hard work pays off. And hard work, when coupled with persistence, is the only thing that will enable us as a society to solve global issues and sustain tomorrow’s world.”

Established in 1947 by a joint committee of the Alabama Academy of Sciences and the Alabama Chamber of Commerce, the scholarship competition was initially segregated with one contest for white students and separate contest for black students.

While that practice ended by the 1960s, few black students participated until the competition was transitioned in 1998 to rely on funding from the Alabama Power Foundation and be administered solely by AAS, according to the committee.

According to the committee, Ryce developed an interest in science at an early age, but his interest reached its peak under the direction of his chemistry teacher and Gorgas teacher-sponsor Debbie Anderson.

By 11th grade, after being turned away by numerous professors, he started work as a high school research intern in a biophysics laboratory under the direction of Associate Professor of Chemistry Aaron Lucius at the University of Alabama at Birmingham.

The research work met the JCIBS requirement that he complete a volunteer work-study program before graduation. Ryce has volunteered there for two years.

His research work, conducted with assistance from UAB undergraduate student Zachariah Ingram and graduate student Clarissa Weaver, included an investigation aimed at the prevention of neuro-degenerative diseases such as Alzheimer’s, Parkinson’s and Huntington’s disease.

Ryce, the son of Tony and Sharon Ryce, will enroll in college this fall with a major in bio-chemistry. He plans to attend medical school and enroll in an MD-PhD dual degree program.

The competition is judged by department heads, deans and professors from several leading universities and industries in Alabama.

Winners and finalists receive offers of tuition scholarships to colleges and universities in Alabama for the study of science.

The purpose of the competition is to promote interest in science and aid in the education of promising students, according to the committee.

The Gorgas scholarship is named for Gen. William Crawford Gorgas, a renowned Alabama doctor and Surgeon General of the U.S. Army who was responsible for controlling yellow fever and making the construction of the Panama Canal possible.

Although he has not yet decided where he’ll enroll in the fall, he’ll no doubt have a distinguished career as a medical practitioner and leader in his chosen specialty.

(The full article, “Gorgas Scholarship goes to black high school student for first time in contest’s 67-year history,” can be found on AL.com along with a slideshow of photos from the event.)