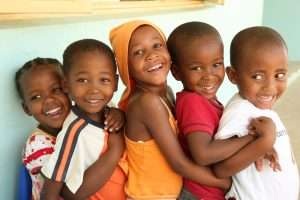 JOHANNESBURG (Reuters) – South Africa’s system of cash grants for children in poor households shows that a little money goes a long way, resulting in bigger, healthier kids who do better in school.

But it’s not all positive. The system, one of the most extensive of its kind in the developing world, now covers 11 million recipients – which means that more than half of South Africa’s children qualify because their parents’ annual income does not exceed 74,400 rand ($7,000) and they live in extreme poverty.

As debt levels rise and economic growth slows, this raises questions about how sustainable the programme is, even as the government discusses raising the age limit to 23 from 18 because many in that age group remain poor and vulnerable in a country where youth unemployment tops 50 percent.

“Everything stops when a child becomes 18. (But) your situation does not stop because you turn 18, you may even head a household,” Lumka Oliphant, spokeswoman for the department of social development, told Reuters.

Expanding the grant might be sustainable because of relatively low debt levels and given current demographics, but the costs could rise sharply if slow economic growth pushes more families into poverty.

So far it seems to be good value for money, with evidence showing the Child Support Grant (CSG) is reaping social dividends that will benefit Africa’s most advanced economy in the long run.

Marisa Coetzee of the University of Stellenbosch has studied the impact of the CSG and published her findings late last year in the South African Journal of Economics.

Using data from a nationwide household survey, Coetzee found that children who received the 310 rand ($29) a month grant for 10 percentage points of their life longer than their peers were, on average, 1 cm taller – a statistically significant difference.

In addition, the probability of such children repeating a school year fell by 4 percent. Household expenditure on food rose by 3 percent per person, Coetzee also found, a significant increase as low-income families spend a large portion of their budgets feeding themselves. This dovetails with other studies such as one on child grants in rural Zambia, which found that the extra cash was spent on food and not items like tobacco and alcohol.

But is the grant sustainable? South Africa’s overall debt equaled 36 percent of GDP in 2011 and is forecast to rise to over 48 percent by 2016/17 – a manageable level, though the pace of growth is a concern.

The child support grant accounts for about 4 percent of government spending – no small change in an advanced emerging market where state expenditure is now 1.25 trillion rand ($118 billion) a year, but hardly a major burden either.

When it started in 1998, the CSG involved a cash transfer of 100 rand per month to eligible children under the age of seven. The age limit has risen steadily and the grant is now provided to guardians of qualifying children up to the age of 18.

The cash dispersed has more than doubled from 19.6 billion rand in the 2007/08 financial year to over 43 billion rand, spurred by inflation and the wider pool of beneficiaries. But that growth has roughly kept pace with rises in overall state spending, a trend explained in part by favourable demographics.

South Africa’s fertility rate has been declining, partly due to urbanisation and family planning, falling to an average of 2.34 women per children in 2013 from 2.71 in 2002, though the number of births has remained roughly constant.

Raising the age to 23 – which is still being discussed in government circles and is at least a year away from becoming policy – would add about 2.5 million recipients. At current levels that would raise the transfer by around 10 billion rand a year – still a level the state can afford as it would represent less than 1 percent of expenditure.

The real wild card is South Africa’s economic growth, which the central bank now sees at only 1.7 percent this year, a forecast it keeps cutting. If the economy continues to expand at a sluggish pace, debt-to-GDP levels may rise faster than expected, pushing more households into low-income brackets.

This could ultimately make the grant and other social programmes an unbearable strain on the national budget. It is bad enough that over half of the country’s children are poor enough to qualify for the CSG. If that were to rise to three-quarters or more, then a shrinking minority of the population would foot the bill – a trend that clearly cannot be sustained.