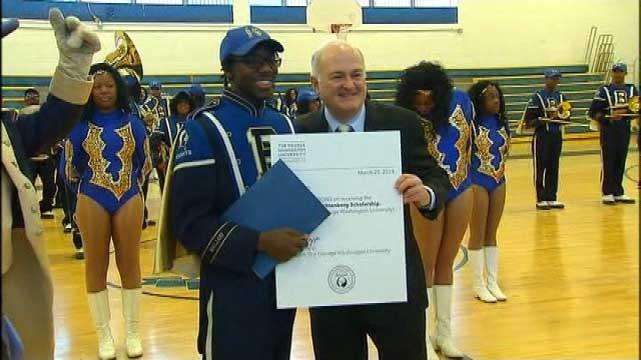 WASHINGTON – Eight D.C. high school students are getting a big boost for their future on Tuesday – Scholarship surprise —and they wouldn’t have seen it coming. The lucky and very worthy seniors are being awarded full scholarships to George Washington University (GWU), and it’s all a surprise to them!

GWU has offered the GW-Stephen Joel Trachtenberg Scholarships for the last 25 years. They reward talented seniors with the four-year scholarships, which are worth more than $200,000. Eight kids win them each year.

Part of the fun is in the surprise. Their acceptance letters are hand-delivered to their schools, and their family members are there when they get the big news!

One of those surprises happened early Tuesday during an assembly at Ballou High School in southeast DC.

Tai’Lon Jackson thought he was just playing in the band during the assembly—but then GW President Steven Knapp called his name. Jackson was still carrying his trombone when he came to accept the letter—with his mouth on the floor!  His classmates erupted with applause as Jackson came forward.

Jackson talked to FOX 5 live on Good Day DC right after it happened. He said his legs were still shaking, and that he had been worrying all week about whether or not he’d get into GW. He said he was told he’d know by April 1—which was less than a week away.

The GW – Stephen Joel Trachtenberg Scholarships began in 1989. To date, the university has committed more than $18 million to the program. They’ve provided 149 academically talented D.C. high school seniors with full, four-year scholarships that cover their tuition, room and board, books, and fees.

Students are selected based on GPA, SAT scores, course of study, teacher recommendations, leadership qualities, community service and other extracurricular activities and achievements. The scholarship is open to all D.C. residents graduating from an accredited D.C. high school.

The scholarships are renewed annually if the recipients meet the university’s academic progress standards. The graduation rate for participants in the program is approximately 90 percent.