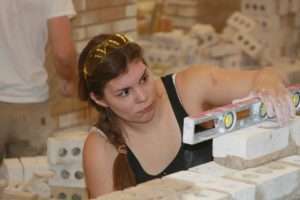 After paying her way through school and buying the necessary tools for her trade with the support of the Government of Canada apprenticeship grants, Nina is proudly graduating without any debt and is well on her way to obtaining her Red Seal ticket.

Nina, Apprentice, Bricklayer: I knew I wasn’t up for university.

My father actually got me started in the masonry industry. He’s a stonemason, so he said: “Hey, why don’t you come to work with me and try it out?” and ever since then I absolutely love it.

I came in with zero experience having never touched a brick, so if I can do it, anybody can do it, right?

Basically, I was at the top of my class all three years.

I was able to use the apprenticeship grants to buy myself all the tools that I needed for the trade. I was able to go through school because of all the grants without any debt. It was amazing!

She’s one of few female faces in a largely male-dominated field. And she’s building a reputation as a quick study — one brick at a time.

Meet Nina Widmer, the first female apprentice in the history of Red River College’s Bricklayer Apprenticeship program. The daughter of German-born master craftsman Alfred Widmer, Nina has been working at her father’s side on historical restoration projects since she was nine.

The Widmer family moved to Canada when Nina was just six weeks old, after Alfred was commissioned produce ornate plaster mouldings and statuary at Fort Garry Place. In the ensuing years, father and daughter have worked together on such projects as the University of Winnipeg’s Wesley Hall, the A.A. Heaps Building (Bank of Nova Scotia), and the Union Bank Tower — soon to be RRC’s Paterson GlobalFoods Institute.

“It’s keeping history alive,” says Nina of her passion for restoration work. “You walk into some of these buildings, and they just take your breath away. And it’s really phenomenal if they can be brought back to their original state — which always looks so much better than plain old drywall.”

Since opportunities for historical restoration work are limited, Widmer entered RRC’s Apprenticeship Bricklaying program on her father’s advice. Given her background in masonry, she hoped it would give her an increased understanding of bricklaying, so was pleasantly surprised to discover there was still much to learn.

“It’s beautiful work, but when I started, I didn’t fully comprehend all you can do with brick,” says Widmer, who is employed by Alpha Masonry, along with her father. “I love working with my hands, and at the end of the day, I love being able to see what I’ve done. And I want to be able to tell my grandchildren, ‘I worked on that 40 years ago, and it’s still standing!’”

Bricklaying instructor Brian Gebhardt says Widmer has taken to the new trade like a natural, and often ranks at the top of her class. While he’s not sure why the industry attracts so few females, he says Widmer’s quick progress often inspires her male classmates to step up their game.

“We have one of the largest classes we’ve ever had, and I think Nina’s work brought everyone else up —they’re all competing with her now,” he says.

“I’m hopeful in two years we can send her to the national Skills Canada competition. I feel like on her ability alone, if we took her today she’d win the thing. So I’m expecting big things from her.”