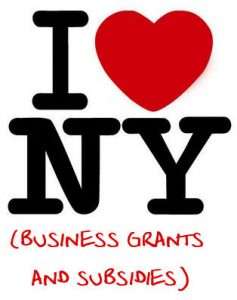 New Yorkers often gripe about the cost of doing business in the state. Not to take away from the pastime of complaining, but when it comes to government grants and subsidies, there are a lot of tax dollars flowing to businesses in the Empire State.

Data from the U.S. Bureau of Economic Analysis, a unit of the Department of Commerce that also calculates gross domestic product data, shows that businesses in New York receive the second-largest amount of government subsidies in the country.

In 2012, the most recent year data was available, businesses and local governments in New York received $6.01 billion in subsidies — about 10 percent of the total handed out nationwide.

“The perceived need for large business subsidies is a reflection of New York’s onerous business climate,” said Tim Hoefer, executive director of the Empire Center for Public Policy in Albany. “Our high taxes and burdensome regulations make it difficult to start or grow a business here, and subsidies shouldn’t be accepted as an alternative to real reforms that promote growth.”

California is the undisputed king of government subsidies. That state’s businesses and local governments received $8.5 billion in subsidies in 2012, making it the No. 1 subsidy state in the country.

Texas was No. 3, but businesses and governments in the Longhorn state only received $3 billion in subsidies in 2012, half of the support that New York state received.

The bulk of the more than $6 billion in government subsidies in New York goes to local and state government entities — about $3.6 billion in 2012 — although it is unclear if that money flows to the private sector or is used to fund local or state government budgets with the effect of keeping tax rates in check.

The Bureau of Economic Analysis, which could not provide a list of the government programs that feed its data set, defines subsidies as “monetary grants paid by government agencies to private business or to government enterprises at another level of government.”

Bureau of Economic Analysis spokesman Cliff Woodruff said the subsidy data captures mostly business grants — not indirect federal subsidy programs such as the Export-Import Bank that provides loans and loan guarantees to export deals by U.S. manufacturers such as General Electric Co. and others.

It’s tough to define how much of the government subsidies that flow through New York are for economic development since the bureau doesn’t break down the numbers that way.

For instance, some of the $6.01 billion is from federal farm subsidies and public housing grants — but it’s unclear if that number includes the money that flows through the state’s Economic Development Councils, which total hundreds of millions of dollars annually.

Because of that vagueness, policy experts at Empire State Development found it difficult to evaluate or comment on the federal numbers, said ESD spokeswoman Jola Szubielski.

Ken Pokalsky, vice president of government affairs at the Business Council of New York State, said the subsidies in the federal data are broad business subsidies that are given across the board in industries such as farming, banking, air transportation and to utilities.

Because of that, the numbers may better reflect population data and the “overall economic climate,” Pokalsky said.

Even when grants to governments are stripped away, New York is still ranked No. 2 in terms of government subsidies for businesses. In 2012, private industry in New York received $2.4 billion in government grants, compared to $1.8 billion for Texas.

So which businesses in New York benefit the most from government grants? You’d be surprised. It’s mostly the state’s real estate industry, which received $1.6 billion in government grants in 2012, according to the bureau.