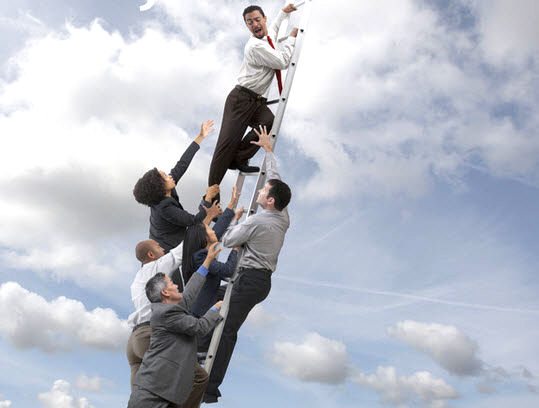 There’s a saying that originated in old Hollywood in the 1930s: “Be Nice to People on Your Way Up. You’ll Meet ‘Em On Your Way Down.”

You know what? That’s great advice for business and real estate investing too, and when you’re looking to get a grant. From the very beginning, in every transaction, it’s to your benefit to treat others with kindness and respect. Of course, that’s just the right thing to do anyway, but if you’re thinking strictly in terms of self-interest, it’s the smart thing to do as well.

You might think that this can’t be true because you can think of plenty of examples of famous, wealthy, apparently-successful people who treat others badly. For some, it’s their shtick or claim to fame, as in the case of certain reality show personalities.

We’ll leave those aside because that’s for entertainment and–despite the name–reality TV is manufactured drama, and not a template for behavior in the real world. Those people aside, what about the ones in real life who are famously awful? They are probably not doing themselves any favors because they likely could have been even more successful using their talents in conjunction with positive relationships with others. Also, they may be successful today, but the final chapters haven’t been written. There’s still a chance yet that their bad actions will end up creating problems later on. And, finally, some are likely miserable people who have to live with themselves every moment of every day.

While it’s true that having a lot of money can smooth out a lot of life’s problems, it isn’t a substitute for real serenity and a sense of knowing that you do what’s right and treat others well. You still have to live with yourself and your actions.

This holds true for regular people too. One favorite trick of law firm partners or financial industry managers is to take potential new-hires out to a restaurant for an interview. In addition to conducting the actual interview, they also will observe how their interviewee interacts with the waitstaff. If someone sees no particular reason to be courteous unless they stand to gain something, is that a person you’d like to be interacting with every day?

I also heard an anecdote about a job seeker who was rude to the receptionist when he arrived for his interview at a company. He considered her to be a low-paid person of no status, and he was applying for an important managerial position. Little did he know, his chances were finished before his formal interview had even begun. Even if he’d somehow gotten the job, how smart was it to have alienated the person who’s at the hub of activity for the company, who controls access to the higher-ups?

Every one of these ideas holds true when you want to get a grant. Often, the process involves communicating with a number of people and cultivating contacts. You may torpedo the chances you have to get a grant if you go around acting like a jerk. You never know how it will come back to bite you, but there’s a chance that it will. Although there are many grants available, that doesn’t mean that the community of grant funding professionals is huge enough that you can be assured of anonymity with bad behavior. Word may travel, and you could needlessly ruin your own chances to get a grant.

One of the techniques I sometimes discuss that can be an effective way to get a grant is to just put word out about what you’re doing. People are happy to help someone they like. However, if you’ve used them and disrespected them in the past, but now you want a favor, how far do you think you’ll get? They might help you buy a one-way ticket out of town, but that’s about it.

In conclusion, especially when you want to get a grant, be nice to people. When you’re not, you may still be able to succeed for a while and imagine that you don’t need anyone’s help. It’ll usually catch up to you, though. Treat people well because it’s the right thing to do and because making enemies isn’t a good path to success.