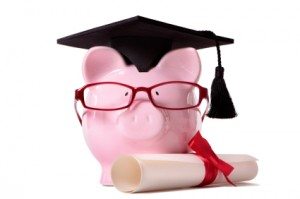 Government grants and scholarships are taking a leading role in paying college bills, surpassing the traditional role parents long have played in helping foot the bills, according to a report.

Fewer families are saving for college, instead relying on government grants and scholarships as the main source of funding for higher education, according to two new reports from private lender Sallie Mae. This is despite soaring tuition and fees, and a high expectation that their children will attend college.

While parents are not paying as much out-of-pocket for college today and families are approaching paying for college more realistically, a Sallie Mae report found that the recession may have had an impact on their ability to save. Since 2010, fewer families are saving in preparation for college, largely due to the “protracted, weak economy” and “more urgent” financial priorities.

“Families are focusing on ‘rainy day’ savings, general non-dedicated savings, and retirement rather than college-specific savings,” the report says. In a survey of 1,600 parents with children under the age of 18, researchers found that half of all families are not saving at all. Just two years ago, in 2010, 60 percent of families were saving for college.

And many of those that do save are not on track to meet their expected savings goals. Most families that are saving set average goals of $39,000 for each child’s college costs, the report found. But in reality, these families’ current savings patterns will leave them with “about half their goal amount.”

Still, 80 percent of parents agreed that college is an important investment and that a college degree is more important today than in previous years. “The concern here is not that families are not willing to save and not willing to pay,” Sarah Ducich, Sallie Mae’s senior vice president for public policy, said. “Parents are actually a little more willing this year to stretch financially. It’s just about whether they have the resources to do that.”

Ducich says that because families cannot control many factors associated with the cost of college, many are eliminating institutions with high tuition in the application process. As another way to keep costs down, a higher percentage of students are also living at home, rather than paying for room and board on campus. “We’ve seen they are approaching the decision to pay for college through a lens of cost-consciousness that I don’t think we saw before the recession,” Ducich says.

Another report that surveyed students and parents shows that families’ average total spending for college per year has mostly leveled out in recent years, at $21,178 in 2012. Average college spending reached a low of $19,435 in 2008 and a high of $24,097 in 2010. But spending for college varies among different socio-economic classes. Middle-class families, the report found, have been spending more overall for college, while high- and low-income families have seen downward trends in the last few years.

And while the rate of parent borrowing remains low, at 9 percent in 2012, students’ out-of-pocket costs and loans now account for a higher percentage of overall college spending. And the average amount for those types of aid has also gone up: students paid about $2,000 from their own income and savings in 2008, and nearly $2,300 in 2012.

Sallie Mae Chief Executive Officer Jack Remondi said in a statement that the change comes from families adjusting to the economy after the Great Recession of 2008. When the recession peaked, parent contribution, scholarship and grant aid were at their highest points. “In this post-recession environment, families overwhelmingly believe in the dream of college, yet they are more realistic when it comes to how they pay for it,” Remondi said in the statement.